Wallis (died March 1999) was one of the henchmen who worked for former British IMF agent Sean Ambrose.

Wallis is one of Ambrose's men who was on board the flight transporting the infected Dr. Vladimir Nekhorvich to Atlanta. He later escapes the plane with Hugh Stamp, Ulrich and Ambrose before it crashes in the Rockies.

Later, he is seen watching Nyah Nordoff-Hall through a camera as she enters Ambrose's house. Wallis is also present when Nyah injects the Chimera virus into herself in Biocyte Pharmaceuticals Headquaters. Afterwards, Wallis helps transfer the money from the CEO of Biocyte, John C. McCloy.

After the death of Stamp, Wallis is involved in the chase when he led one of the vehicles to pursue Ethan Hunt, a field team leader of the Impossible Mission Force. He is killed along with Ulrich and another henchman when a truck strikes his car, causing it to explode. 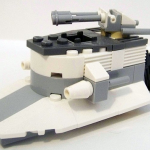