Sean Patrick Ambrose (c. 1966-1999) was the main antagonist in the 2000 action/thriller film Mission: Impossible II, the second installment of the Mission: Impossible film series. He was a rogue IMF operative turned terrorist bent on releasing a virus named Chimera and selling the cure, Bellerophon, for profit. He also was the ex-lover of professional thief Nyah Nordoff-Hall, who was recruited by the IMF during the investigation about him.

Sean Patrick Ambrose was presumably born in the United Kingdom (as stated by his nationality) circa 1966. Later in his life, he joined the Impossible Mission Force as a computer specialist. During his IMF career, Swanbeck replaced Ethan Hunt with Ambrose to face-double Hunt on field missions when the latter could not be found. This leads Ambrose to use an Ethan Hunt latex mask as his main disguise in 2000. According to Ethan, he and Ambrose had reservations with each other during their career.

At around 1999, Ambrose became interested with Dr. Vladimir Nekhorvich's synthetic virus, Chimera, and he wanted to sell its cure, Bellerophon, to the highest bidder. Eventually, he began to form his own group, with Hugh Stamp as his right-hand man, while still in the IMF.

Prior to the events, Ambrose was in a relationship with a highly capable professional thief, Nyah Nordoff-Hall, and it became close and sexual.[2] The relationship ended, as Hugh stated that she "didn't gag for it" six months ago. Swanbeck also notes that Ambrose has missed her, wanting her back ever since.

While Ethan Hunt is on vacation, the IMF assigns Ambrose to cover for Hunt and pose as "Dmitri" (Ethan's alias with Dr. Nekhorivch when he saved his life) and fly on the plane with Dr. Nekhorvich to the United States. In mid-flight, he reveals to Nekhorvich that he is not Dmitri and kills him by breaking his neck. Ambrose takes his bag containing the package and escapes to "Checkpoint Charlie" with three of his men; Hugh, Ulrich and Wallis, just as the plane crashes in the Rockies.

Returning to Sydney, Ambrose helps Nyah to be released from prison (a ruse planned by Ethan and his team to get information on Ambrose) and returns her to his residence. After having a hour with Nyah, Hugh becomes wary of her returning before Ambrose uses his cigar cutter to cut his little finger. At a horse race event, Sean has a business meeting with CEO John C. McCloy, where Ethan and his team collect information on the pharmaceutical company named Biocyte.

Questioning the events, Ambrose disguises himself as Ethan again and speaks with Nyah, who reveals herself to be Ethan's lover and tells her to listen to what ever Ambrose says. As she leaves, Ambrose removes his mask in a silent anger and Hugh tells him that Ethan interrogated McCloy while disguising as the doctor. Knowing he will go into Biocyte, he and his men wait for Ethan to collect the Chimera virus and attack him there with Nyah as their hostage.

Telling Ethan he has her hostage, he orders her to get the last Chimera sample, but she injects herself with it. Knowing he will not kill her for the money, Ethan saves Nyah and fights back, but leaves her alive and escapes. Ambrose makes Nyah go off in Sydney to die and release the virus as he goes to the Biocyte island complex with his men.

Meanwhile, Ethan infiltrates the complex and he uses a latex mask to disguise himself as Hugh after the latter was knocked out by the explosion from his grenade during the stand-off. Then, "Hugh" takes "Ethan" to Ambrose, whom he promptly tortures and kills in enjoyment. Seeing the patched-up finger on the corpse, he screams in horror when unmasking Hugh.

Ambrose, Wallis, Ulrich and their group engage in pursuit that result in the beginning of a motorcycle chase between Ethan and Ambrose. They take on in a fistfight, with Ethan gaining the upper hand on Ambrose. Then, he grabs a Beretta 92FS and cackles towards Ethan, telling the protagonist that he should have killed before the latter grabs a USP Compact to kill Ambrose.

Sean Ambrose was a man who determined himself to become rich by selling the Chimera virus. Though he thinks he is caring, he is quick to aggression and showed himself to be possessive and arrogant. Examples are when he refused to listen to Hugh's warning of Nyah's return or pointing his gun at McCloy when he questioned him while torturing Hugh (disguised as Hunt).

As a former IMF agent, Ambrose was very perceptive to every IMF's tactics as noted when he grabbed Hugh who implied that Nyah's sudden return was alluding to Hugh himself of possibly a mole in his group sent by the IMF to spy on them, particularly his former colleague, Ethan Hunt, since he was previously ordered to disguise as him during missions when Hunt was needed but unavailable to answer.

In fact, it is possible that doubling for Hunt on various missions caused Ambrose to develop a resentment towards his former colleague and employer in particular as it is possible that he almost never allowed to show his real face during most of his time in his IMF career. When they meet, Ambrose shows his contempt for Ethan, saying the hardest part of dubbing him was "grinning like an idiot every fifteen minutes".

One of Ambrose's defining traits is his explosive temper. He can switch from calm and composed to violently enraged within seconds and even the moments when he is more composed have an underlying threat to them, a sense that Ambrose's politeness is just a way of covering his violent streak. Even his own men and allies are not immune to such treatment as his lashing out at Hugh showed.

Despite his flaws, Ambrose was extremely intelligent and calculating, planning a plane assault with his men, and gaining Nyah's information while disguising as Hunt. He was also suave and somewhat caring for his own allies, notably Nyah. When she returned, he showed himself to be happy and joyful with her at the horse race. Despite his care for her, he implies his usage of sex to Hugh before using the cigar cutter. When he killed Hugh, he appeared to be horrified by his actions, showing he cared for him somewhat.

That being said, he could turn on others, showing ruthlessness if needed. Notably when Nyah injected herself with Chimera, he called her "bitch" in frustration, but did not kill her because she had £37,000,000 worth in her. When McCloy became disturbed by his violent act of torturing the masked Hugh, he pointed his gun at the latter. And when Hugh questioned him on Nyah's return, he used his cigar cutter on him.

Ambrose is defined by his ruthlessness, in sharp contrast to Ethan. He has no issue in killing dozens of people to accomplish his goals and expresses a dismal view of Ethan's preference for avoiding casualties with Ethan saying he "doesn't feel he's done his job unless he leaves a lot of hats on the ground". He is completely indifferent to the millions who would die if his plan to release the virus succeeded.

Ambrose was also a man of enjoyment and riches, wearing expensive clothing and gambling at horse racing. He strongly enjoyed Cuban cigars. 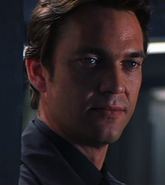 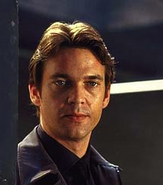 Dougray Scott originally had to portray Wolverine in the 2000 film X-Men after completed shooting for Mission: Impossible II in October 1999 but the key creatives of the spy film starring Tom Cruise disagreeing over story beats and crew members dropping out during filming and the constant delays and uncertainty over the script made that look increasingly unlikely as the date approached, resulting with Scott being unavailable to appears in X-Men which forced the film's production to cast Hugh Jackman for the part of Wolverine. Since, the Mission: Impossible film series is somewhat infamous for their messy productions, often starting filming without completed screenplay[3].

The scene where Tom Cruise, "comes off his face" to reveal Dougray Scott was made in one shot by pulling the two actors against a green screen. Cruise, not wearing a mask, contented himself with telling him to place his hand in a prearranged position under his chin, then passed his hand over his face. Scott wore a simple mask with sensors that could provide a computer with a three-dimensional view of his face. He then took off this mask to finish the scene. The face of the cruise was superimposed on the mask as it was removed and the two images gathered in the computer; the bottom of Boeing 747 cabin was added to replace green-screen. (Look at the scene with the frame advance and you will see a slight "swirl" transition on the mask halfway through the scene). Makeup artist Kevin Yagher has contributed to some more traditional latex mask effects for other face peeling scenes[4].

During the filming of the final battle with Scott, Cruise insisted that a real knife be used, and that it stops exactly a quarter of an inch from his eyeball, instead of a place vaguely close to his eye, as John Woo suggested. The knife itself was connected to a cable that was carefully measured in order to get the effect and Cruise insisted that Scott use all his strength in the ensuing struggle[4].