Sarah Davies (March 23, 1963 – 1996) was a supporting protagonist appearing in the 1996 action/thriller film Mission: Impossible. She was a field operative of Jim Phelps's Impossible Mission Force team who is murdered in the opening mission.

According to the briefing tape sent to Jim Phelps in the opening of the film, Sarah Davies was born on March 23, 1963, is an English national and have a relative named Martin James Davies (who is possibly her father or her husband).

In 1996, Sarah participates in a mission in Prague, Czech Republic, to prevent a NOC of the IMF from being stolen and sold on the black market. Under the codename of Sarah Walker, the agent infiltrates a party and follows the traitor agent Alexander Golitsyn with Ethan Hunt. However, their colleagues begin to be killed and Jim Phelps orders the entire team to retreat. Disobeying this order, Sarah continues to follow Golitsyn in the street and is stabbed with him through a gate by a man named Franz Krieger.

Later, an enraged Ethan embarks on a mission to find out who are the murderers of Sarah and others and discovers that Phelps has sponsored the killings of his own equipped and that Krieger is working for him. He avenges the dead by killing them both together. 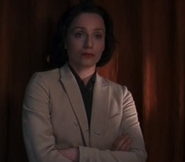 Sarah's body is found by Ethan.
Add a photo to this gallery

Retrieved from "https://missionimpossible.fandom.com/wiki/Sarah_Davies?oldid=10967"
Community content is available under CC-BY-SA unless otherwise noted.