Sabine Moreau (born c. 1986 - 2011) was a major antagonist in the 2011 action/thriller film Mission: Impossible – Ghost Protocol, the fourth installment of the Mission: Impossible film series. She was a French contract killer in league with terrorist Kurt Hendricks and Jane Carter's archenemy for killing her lover, Trevor Hanaway.

Sabine Moreau is a French professional assassin who always pays herself in diamonds. She is responsible of various crimes as serial homicide and contract killer. It is implied that Moreau has worked with Russian terrorist Kurt Hendricks in the past because she is hired by him to steal a file containing Russian nuclear betting codes for the nuclears missiles that Hendricks plans to uses for destroy a Russian Navy submarine, aiming it at San Francisco, in order to ignite a nuclear conflict between Russia and America. To this end, Sabine travel to Budapest, Hungaria, where the files are stored.

However, an American agency, the Impossible Mission Force, are assigned to intercept the courier holding the codes and one of his agents, Trevor Hanaway, manages to intercept the it but he is then chased by armed men who are also after the launch codes. After managing to kill the men, Hanaway goes to an alley where he sees Moreau coming in his direction. Since Hanaway receives a message warning him of Moreau at the same time, he is distracted and the criminal can pull a silenced pistol and shoot Hanaway several times in the stomach. Hanaway falls to the ground and Moreau gives him three more shots, takes his bag of documents and escapes, leaving him to die.

Meeting the IMF in Dubai and Death[]

Moreau now travels to Dubai to sell the stolen codes at the Burj Khalifa hotel to Hendricks's right-hand man, Marius Wistrom, for diamonds. However, Ethan Hunt and IMF chief analyst William Brandt are tricking Moreau into believing that Ethan is Wistrom and Brandt his analyst, Leonid Lisenker. The pair meet the French and her two bodyguards in a room and Moreau asks who the two men is Wistrom and Ethan introduces himself. After Moreau's henchmen have searched the two for weapons, she invites them to sit down. Ethan asks for the codes but Moreau wants to know where her diamonds are. Both do not want to give up their property first, so Moreau finally orders their guards to shoot Brandt, causing Ethan to reminding her of who they are working for and claims that they will either return with the codes or not at all. The spy also warns that they have posted the best guards in the corridor, but Moreau laughingly replies that she has killed the best for a long time.

Ethan finally claims that they should get it over with and reveals that he will have the diamonds brought as soon as Brandt has verified the authenticity of the codes. Finally, Sabine agrees and lets her men hand over the file. Shortly after, recently promoted field agent Benji Dunn, disguised as a waiter, enters the room and hands Moreau's bodyguard the diamonds that a female agent, Jane Carter, has scanned in another room with Wistrom. Moreau claims that it was a pleasure to do business with them, but sees in Brandt's eyes the contact lens with which he checked the codes. Moreau so realizes that she has been deceived and orders her henchmen to kill them. As Ethan and Brandt fights them, the hitman manages to escape but is caught by Jane, who wants to get revenge on Moreau for killing Trevor Hanaway (who was her boyfriend) despite Ethan's warning that they needs her alive as she had information.

Jane then brings her up to the team's room and tell Benji to watch her, handing her pistol. Sadly, Benji is temporarily distracted long enough for Moreau to knock him out with a swift kick. The antagonist then attempts to kill him but Jane stoppes her and they both fight. As the two are fighting with the pistol, they get to the window of the room, destroyed earlier by the team, and Moreau can throw Jane to the ground. As Sabine is about to shot Jane, Brandt then comes up to the room and yells at Jane to stop but she fails to listen to him and kicks Moreau out the window, causing her to fall to her death. So, Jane is avenged from Hanaway's death.

Sabine was depicted as being cold-blooded, impassive, creepy, grim, vicious, bloodthirsty, highly intelligent, arrogant and beautiful. She was extremely ruthless, and isn't capable of any sort of emotional connection with her victims. She was a woman of few words, somewhat overcautious about who she makes contact with. Additionally, she was enigmatic and cruel.

Sabine was adept at hand-to-hand combat. This was shown when she holds her own against Jane Carter for a considerable amount of time. She was also a highly skilled markswoman, as she carries a Beretta sub-compact automatic pistol as her weapon of choice, using it to kill agent Hanaway. 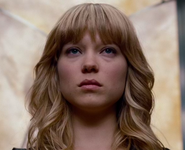