Mission: Impossible – Ghost Protocol is a 2011 spy film, and the fourth installment in the Mission: Impossible film series series. It stars Tom Cruise, who reprises his role of IMF Agent Ethan Hunt, and is director Brad Bird's first live-action film. Ghost Protocol was written by André Nemec and Josh Appelbaum, and produced by Cruise, J.J. Abrams (director of third film) and Bryan Burk. It is the first Mission: Impossible film not produced by Paula Wagner, and the first of the series to be partially filmed using IMAX cameras. The film was released in North America on December 16, 2011, to critical acclaim.

On assignment in Budapest, Hungary, to intercept a courier working for a person of interest code-named "Cobalt", IMF agent Trevor Hanaway is killed by a French assassin named Sabine Moreau. Hanaway's team leader, Jane Carter, and newly promoted field agent Benji Dunn extract Ethan Hunt and his source Bogdan from a Moscow prison. Ethan is recruited to lead Jane and Benji to infiltrate the secret Kremlin archives and locate files identifying Cobalt. Partway through the mission, someone broadcasts across the IMF frequency, alerting the Russians to Ethan's team. Although Ethan, Benji, and Jane escape, a bomb destroys the Kremlin, and Russian agent Anatoly Sidorov accuses Ethan of masterminding the attack.

The IMF extracts Ethan from Moscow. The Russians have called the attack an undeclared act of war, and the US president activates "Ghost Protocol", a black operation contingency that disavows the entire IMF. Ethan and team are to take the blame for the attack, but they will be allowed to escape from government custody so that they may operate to track down Cobalt. Before Ethan can escape, the IMF's secretary is killed by Russian security forces led by Sidorov, leaving Hunt and intelligence analyst William Brandt to find their own way out. The team identifies Cobalt as Kurt Hendricks, a Swedish-born Russian nuclear strategist who believes the weak must die for the strong to survive, so he plans to start a nuclear war to initiate the next stage of human evolution. Hendricks bombed the Kremlin and acquired a Russian nuclear launch-control device, and now needs its codes from the Budapest courier in order to launch a nuclear missile at America.

The exchange between Moreau and Hendricks's right-hand man, Marius Wistrom, is due to take place at the Burj Khalifa in Dubai. There, Ethan's team-members separately convince Moreau and Wistrom that they have made the exchange with one another. However, Moreau identifies Brandt as an agent. While Ethan chases Wistrom only to realize that the mercenary is actually Hendricks in disguise, escaping with the code Jane detains Moreau. Moreau attempts to kill the inexperienced Benji, and Jane throws her out a window to her death. Brandt accuses Jane of compromising the mission for revenge against Moreau, but Ethan accuses Brandt of keeping secrets from them, as he has displayed fighting skills atypical of an analyst. While Ethan seeks more information from Bogdan, Brandt admits he was assigned as security detail to Hunt and his wife Julia while on assignment. Julia was killed by a Serbian hit squad, prompting Ethan to pursue and kill them before he was caught by the Russians and sent to prison.

Bogdan and his arms-dealer cousin inform Ethan that Hendricks will be in Mumbai, India. Hendricks facilitated the sale of a defunct Soviet military satellite to Indian telecommunications entrepreneur Brij Nath, which could be used to transmit the order to fire a missile. While Brandt and Benji infiltrate the server room to take the satellite offline, Jane gets Nath to reveal the satellite override code. But Hendricks has anticipated Ethan's plan and takes Nath's servers offline before sending a signal from a television broadcasting tower to a Russian nuclear submarine in the Pacific. The submarine fires on San Francisco, California. Ethan pursues Hendricks and the launch device while the other team-members attempt to bring the broadcast station back online. Hunt and Hendricks fight over the launch-control device before Hendricks jumps to his death with it to ensure the launch. Benji kills Wistrom, allowing Brandt to restore power to the station and enabling Ethan to deactivate the missile, while a dying Hendricks witnesses the failure of his plan. He is confronted by Sidorov, who sees Ethan has stopped the missile, proving the IMF is innocent in the Kremlin bombing.

The team reconvenes weeks later in Seattle. Ethan introduces the team to former colleague Luther Stickell, and then issues them new assignments. Benji and Jane accept, but Brandt refuses to accept the mission. Ethan so reveals that Julia's death was staged, as he knew he could not protect her and used her death as a pretext to infiltrate a Russian prison and get close to Bogdan, an IMF source on Hendricks. Relieved of his guilt, Brandt accepts his mission while Ethan watches Julia from afar knowing that they will be together again when they are safe. They share a smile before he goes off on his next mission.

The film was originally announced with a working name of Mission: Impossible 4, and codenamed "Aries" during early production.[9] By August 2010, title considerations did not include Mission: Impossible IV name, thought was given to not including the specific term "Mission: Impossible" in this entry of the franchise, which Variety compared to the Christopher Nolan's Batman film titled simply The Dark Knight.[10]

The film was partially shot with IMAX cameras, which made up approximately 30 minutes of the film's runtime.[11][12] Bird insisted that the film be shot in IMAX, as opposed to 3D, as he felt that the IMAX format offered the viewer more immersion due to its brighter, higher quality image, which is projected on a larger screen, without the need for specialised glasses.[13] Bird also believed that IMAX format would bring back "a level of showmanship" to the presentation of Hollywood films, which he believes the industry has lost due to its emphasis on screening films in multiplexes as opposed to grand theaters, and vetoing "first runs" in favor of wider initial releases.[13]

Principal photography took place from October 2010 to March 2011.[1] Filming took place in Dubai, Prague, Moscow, Mumbai, Bengaluru and Vancouver.[14][15][16] Tom Cruise performed a sequence where Ethan Hunt scales the outside of the Burj Khalifa tower, which is the tallest building in the world, without the use of a stunt double.[17] Although Cruise appears to be free solo climbing in the film with the help of special gloves, in reality he was securely attached to the Burj Khalifa at all times by multiple cables.[1] The cables were then digitally erased in post-production by Industrial Light & Magic. Following Cruise's example, Patton and Seydoux also chose to forego the use of stunt doubles for their fight scene at the Burj Khalifa where Carter exacts her revenge upon Moreau for Hanaway's death.[1]

Many of the film's interior scenes were shot at the Canadian Motion Picture Park in Vancouver, including a key transition scene in a specially equipped IMF train car and the battle between Hunt and Hendricks in a Mumbai automated multi-level parking garage (which was constructed over a six-month period just for the film).[1] The film climax scene was shot in Sun TV office, Chennai, India.[18] However, the film's opening Moscow prison escape scenes were shot on location in a real former prison near Prague.[1] The film also features a BMW i8 concept car. Most of the cars (if not all) in the parking deck are left hand drive, even though the scene takes place in India, which drives on the left side of the road.

The score for the film was composed by Michael Giacchino, his second for the franchise and his third collaboration with Bird following The Incredibles and Ratatouille. The soundtrack will be released by Varèse Sarabande on January 10, 2012.[19]

As of December 23, 2011; the film has received critical acclaim, scoring 93% on the film-critic aggregate site Rotten Tomatoes, based on 161 reviews, making it the most acclaimed entry of series. The site's critical consensus is, "Stylish, fast-paced, and loaded with gripping set pieces, the fourth Mission: Impossible is big-budget popcorn entertainment that really works."[3]

Roger Ebert of the Chicago Sun-Times gave the film three-and-a-half stars out of four, saying the film "is a terrific thriller with action sequences that function as a kind of action poetry".[22] Philippa Hawker of The Sydney Morning Herald gave the film three stars out of five, and said it is "ludicrously improbable, but also quite fun."[7] As Owen Gleiberman of Entertainment Weekly analyzed, the movie "brims with scenes that are exciting and amazing at the same time; they're brought off with such casual aplomb that they're funny, too. ... Ghost Protocol is fast and explosive, but it's also a supremely clever sleight-of-hand thriller. Brad Bird, the animation wizard, ... showing an animator's miraculously precise use of visual space, has a playful, screw-tightening ingenuity all his own."[23]

Dan Kois of Slate.com, commenting on the film's craftsmanship and context, said, "Along with [being] many other things — a crackerjack action picture, a smoothly operating product-endorsement machine, a useful guide to the obscuring of Cruise's annoying persona via millions of dollars of special effects — the fourth 'Mission: Impossible' movie also functions as a primer on how to use IMAX technology to immerse an audience. The scenes on the Burj gave me more vertigo than Vertigo."[24]

In limited IMAX release in North America, it earned $12.8 million over its opening weekend, including $4.1 million on its opening Friday.[25] Internationally, it debuted to a $69.5 million in 42 markets representing approximately 70 percent of the marketplace. In the United Arab Emirates, it set an opening weekend record of $2.4 million.[26] 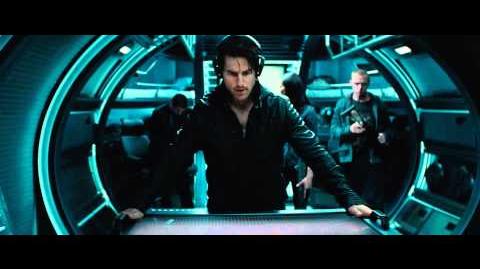