Lindsey Elisabeth Farris (died 2006) was a supporting protagonist in the 2006 sequel film Mission: Impossible III. She was an operative of the Impossible Mission Force and Ethan Hunt's protégé who was captured by the infamous Owen Davian.

Lindsey Farris joined the IMF at an unknown time (presumably early 2000s) and was trained by her mentor and friend Ethan Hunt, who had retired from field work. Ethan taught her the Filipino martial arts of Eskrima in one flashback. Becoming a skilled agent, she was given a mission in 2006 to investigate an arms dealer named Owen Davian. Before being captured, Lindsey mailed her mentor a postcard with information, telling him that Theodore Brassel was working with Davian as a mole, but John Musgrave is later revealed to be the mole in Shanghai.

During a mission, she was captured by Owen Davian and was implanted with a explosive charge in her head. IMF agent Musgrave informs Ethan of her capture, and picked his team members to rescue her, Declan Gormley, Zhen Lei, and his old partner Luther Stickell.

Ethan rescues Farris and two have to shoot their way through Davian's henchman. Getting to the helicopter, he learns that Lindsey has a explosive charge in her head that had just being activated, and tries to disarm it. While trying to do so, the explosive charge detonated, killing her instantly. Ethan, shocked and saddened, tearfully holds his protégé. Lindsey was returned to the IMF and later buried at Lexington Cemetery in Lexington, Kentucky.

Lindsey was trained by Ethan Hunt, a highly trained IMF agent known for his leadership, skills and doing impossible missions. Though her full training is not known, she was trained in Eskrima martial arts in one flashback. 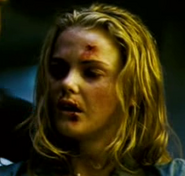