Hugh Stamp (c. 1964-1999) was the secondary antagonist in the 2000 film Mission: Impossible II. He was Sean Ambrose's right-hand man and main henchman of his terrorist group.

Hugh Stamp was born in South Africa possibly in 1964 and he met former agent of Impossible Mission Force, Sean Ambrose, and they became good friends. After Sean left the IMF, he formed his own group with Hugh as his right-hand man when Sean was getting interested in Dr. Vladimir Nekhorvich's newly genetic virus, Chimera, and planned to sell the cure, Bellerophon, to the highest bidder. Hugh always speaks with a South African accent conforming to his nationality.

Hugh appears for the first time as the pilot of the plane which is carrying Dr. Nekhorvich and his boss, Sean. Stamp's mission is to cause the plane to crash in the Rockies and kill Nekhrovich, which he succeeded and escaped with Ulrich, Wallis and Sean to reach their designated landing point, "Checkpoint Charlie," just before the plane crashed.

He reappears later when Sean leaves to see his former girlfriend who is a highly capable professional thief, Nyah Nordoff-Hall, at their residence which doubles as the base of operations for Sean and his group. He is wary of Nyah's presence until Sean, who is not suspicious at all, slice a portion of Stamp's right finger with a cigar cutter.

Throughout the rest of the film, Hugh wears a patch on top of the finger.

Towards the end of the film, he looks for IMF agent, Ethan Hunt, and kill him when the latter infiltrates a heavily-guarded island storage complex belonging to a pharmaceutical company, Biocyte, but after a short confrontation, "Stamp" returns to the room with the captured "Ethan" and bring him to Sean's presence. Sean tortures and kills "Ethan" in enjoyment, but after noticing the patched-up finger on the corpse, Sean realizes that he had just killed his old friend and screams in horror over his actions.

It was revealed that Ethan disguised himself as Stamp while masking the latter with the mask in order to push Sean to kill him.

Stamp was very loyal to his employer and the leader of the terrorist group, Sean Ambrose, despite the fact that he cut off part of his right finger. He is motivated to help in his projects and seems to feel a certain pleasure in tracking down Ethan Hunt. 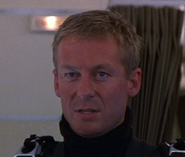 Stamp disguised as a pilot.

Stamp about to be cut by Ambrose's cigar cutter.

The role of Hugh Stamp is played by Australian actor Richard Roxburgh.

When Ethan Hunt is hit in the leg by Sean Ambrose and mumbles, it's obvious that Tom Cruise, who played Ethan, does not mumble, but Dougray Scott, who was added in post-production, suggests that this is not the real Ethan Hunt, but Hugh Stamp disguised as Ethan Hunt.[2]