Burj Khalifa (Arabic: برج خليفة‎ "Khalifa Tower"), known as Burj Dubai prior to its inauguration, is a skyscraper in Dubai, United Arab Emirates, and is currently the tallest structure in the world, at 829.84 m (2,723 ft).

It is prominently featured as a location in the 4th Mission Impossible film, Mission: Impossible – Ghost Protocol. For the role of Ethan Hunt, actor Tom Cruise did his own stunts, including rappelling down, running on, climbing, and "flying" around on a rope. Cruise almost got injured slamming into the side of the building while moving around in his harness.

Behind the Scenes Stunt Footage[] 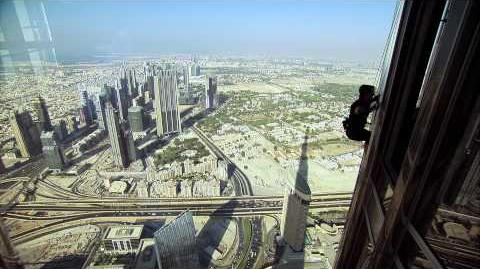