Anatoly Sidorov (born c. 1963) is a character in the 2011 film Mission: Impossible – Ghost Protocol. He is a Russian agent who pursues Ethan Hunt and the IMF during the film, suspecting that Ethan is responsible for the Kremlin bombing.

After Ethan Hunt is knocked out from the Kremlin explosion, he awakens in a hospital handcuffed to a gurney. Anatoly Sidorov stands over Ethan and shows him his reversible jacket, specifically the side with Russian patches, and plays an audio recording of English voices planning the bombing, and impliying he thinks that Ethan is responsible for the terrorist attack at the Kremlin.

Ethan watches news coverage of the Kremlin bombing, before being wheeled into a nearby room by a nurse, who drops a paper-clipped stack of papers onto Ethan's gurney. Ethan steals the paperclip and watches as Sidorov and his men argue with the nurse in the hallway. Moments later, Sidorov looks back at Ethan's bed and is shocked to see that it is empty. He rushes into the room, and to the open window. Out on the ledge, barefoot and barely clothed, Ethan stands, looking down at the street, five stories down. Sidorov smirks, inviting Ethan to jump. Ethan appears to surrender to Sidorov, but at the last moment, he grabs an overhead cable and zip-lines down to the street below, landing awkwardly on a passing delivery van. He hastily apologizes to the driver and disappears around the corner. Sidorov radios his men and tells them to apprehend Hunt. Ethan steals a jacket and a pair of boots and sneaks away.

Later on, Ethan meets with the IMF Secretary and his Chief Analyst William Brandt in their SUV. The Secretary tells Ethan that the Russian government has placed the blame of the Kremlin bombing on Ethan and his team, and as a result of their 'actions', the entire agency has been disavowed by the President through a contingency measure, "Ghost Protocol." Ethan asks Brandt for a pen, and Ethan quickly draws a headshot of the man he saw in the Kremlin, Cobalt, and asks Brandt who he is. Brandt tells him that Hendricks is a Swedish-born Russian strategist, who believes that a nuclear apocalypse is the next stage in human evolution. Hunt tells them both that he saw Hendricks steal the Russian nuclear launch device, and that he bombed the Kremlin to cover his tracks. The Secretary tells Ethan that he has orders from Washington to apprehend Hunt and his team, and return them to Washington where they will be imprisoned for their crimes, however, the Secretary is willing to contradict those orders, under the guise that Ethan conveniently escapes their custody, and assaults both he and Brandt in the process - a statement which shocks Brandt. Ethan and his team will still operate as IMF agents, albeit as "Ghost Protocol" agents. He tasks Ethan with finding Hendricks and gives him a flash drive containing with the mission details. Before Ethan can escape, the vehicle is shredded with gunfire and both the Secretary and the driver are killed and the vehicle careens off a bridge and into the icy water below. Russian agents led by Sidorov and his partner fire hundreds of bullets into the SUV, even as it sinks further into the river below. Ethan takes the driver's body, lights a flare, and sends them both floating away in the opposite direction. The agents fire at the flare, while Ethan and Brandt escape unscathed.

In Moscow, Sidorov learns of Ethan's prison escape from his partner, and is handed a file, in which he sees the mugshots of Ethan and Bogdan. Then, he narrows his search for Ethan.

In Dubai, Sidorov catches up to Ethan, but before he could apprehend him, Ethan punches Sidorov in the face, tosses his man into the air, and sends them both tumbling down the stairs.

Later, while getting treatment for his injured nose, he recieves a call from Bogdan's cousin, The Fog, who implies that he has a long rap-sheet and suggests that if Sidorov were to clear his record, he would tell him where Ethan was going, which Sidorov agrees.

Sidorov later arrives in Mumbai with his men, and tries searching for Ethan at the party. After Hendricks is killed and Ethan deactivates the launch control device to the nuclear missile, Sidorov sees what Ethan has accomplished by the means of proving that the IMF is innocent in the Kremlin bombing and that he and Ethan are on the same side before Sidorov plans to bring Ethan to the hospital due to his injuries from the car crash after a few words with him. 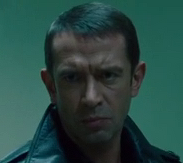 Retrieved from "https://missionimpossible.fandom.com/wiki/Anatoly_Sidorov?oldid=11143"
Community content is available under CC-BY-SA unless otherwise noted.