He was the Director of the Central Intelligence Agency (CIA) until the events of who had an adversarial relationship with the Impossible Mission Force of which he nevertheless becomes the new IMF Secretary after the first defeat of a criminal shadow organization named the Syndicate.

Hunley became Director of the CIA after being in the CIA since at least 1996 when Ethan Hunt and his IMF broke into the CIA to steal a NOC list. Years later following the attempted mass destruction by an extremist terrorist named Kurt Hendricks foiled by the Impossible Mission Force in major ways that resulted in the destruction of the Kremlin, Alan Hunley convinces the Senate Committee to shut down the agency because of its dangerous actions and fold of its assets to the CIA. Following the hearing, he questions William Brandt about the activities of Ethan Hunt, now on the run. Brandt claims to ignore everything about his friend and reports that he is hounding the Syndicate. However, Hunley recalls that the CIA is talented and yet found no proof of the existence of the organization and that it believes that it is a fantasy created by Ethan to justify the IMF's existence. Considering the latter as dangerous, Hunley oversees a manhunt on him but Ethan is able to flee them for six months while continuing his investigations on the Syndicate. Later, the CIA director questions Benji Dunn about Ethan but still does not receive any information.

At the same time, Benji receives an invitation to the Vienna Opera House, Austria, and decides to go there, only to understand that Ethan was behind this in order to seek his help to hunt down the Syndicate. The two men discover that the organization has targeted the Austrian chancellor who, despite the efforts of Ethan, Benji and an infiltrated female spy named Ilsa Faust to protect him, is killed by a bomb taked in his car. Hunley now believes that Ethan and Benji are responsible for this heinous crime and authorizes the CIA to execute them, causing Brandt and Luther Stickell to join them in Morocco to protect and help them.

Hunt, disguised as Atlee, shoots the Prime Minister with a dart filled with truth serum and forces him to divulge passphrases to the box. He must exchange offshore accounts for the Syndicate to release Benji, previously removed by the organization. Hunley condemns Ethan for plunging US-British relations back into the American revolution. Just then, the real Atlee makes his entrance but receives in turn the serum of truth. He turned to the Syndicate, only to Solomon Lane divert the project, forcing him to conceal it as well as to disavow Ilsa Faust. Ethan then asks Hunley to give the antidote to the Prime Minister and tell him that he was attacked when the Prime Minister became aware of the union and Hunley saved him. After a while, Hunley nods and lets Ethan go after Lane.

After Lane's capture, Hunley asks the Senate Committee, with Brandt's help, to restore the IMF. The American claims that his previous actions were part of a plot to expose and close the Syndicate, an operation that required Ethan's coverage to be absolute and therefore only a handful of agents. When the committee asks, he tells them that he can not say anything without the approval of the secretary. Hunley takes a surprised look at Brandt, and the IMF restored, Brandt congratulates him on his new position as IMF secretary.

Two years later, Hunley sends Ethan on a mission to obtain three Plutonium cores, but is forced to send August Walker, an agent of CIA, with him. Later, Hunley, along with the IMF, traps Walker into revealing his true colors. Walker had been working with Solomon Lane to get the Plutonium and make 3 nuclear bombs with it. As part of the deception, Hunley apparently turns on Ethan's team and is tranquilized but then reveals the deception after Walker is exposed. Hunley comments that he gets why they enjoy their work so much and is officially welcomed to the team by Ethan.

As the IMF find out his identity, CIA show up. Walker's undercover men start a gunfight, and Hunley corners him, saving Ethan's life by stopping Walker from shooting Ethan in the back. In the fight, Walker stabs Hunley, rupturing his appendix in the process. Hunley collapses to the ground to which Benji rushes over to him, Ethan rushes over to help Hunley. However Hunley tells him to go and stop Walker before succumbing to his wounds.

Although not on par with agents such as Ethan Hunt or August Walker, Alan is still is a fairly capable combatant, holding up against the younger and more skilled August Walker during their brief fight. Alan proves to be an expert leader too, leading the CIA for a few years and eventually becoming the Secretary of the IMF. 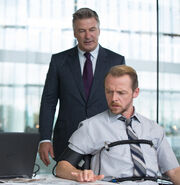